WHERE DOES YOUR INFORMTION COME FROM? 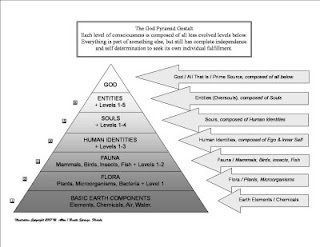 The question as it is posed; does your information come directly from God?I do want to briefly address this question from a reader. Obviously this reader has not read other articles that I have published about the God Gestalt or he wouldn’t have asked the question in the first place. But, since it was asked, I will try to address it again, maybe from a new perspective and hopefully also including a diagram. Now, I am not a professional artist, so don’t expect perfection here since this is my first attempt at publishing a diagram along with the usual text.

Please remember that I am trying to explain a concept that is beyond description with mere words and much of the Knowledge that is known about the “Primary” is only known as it is stepped down and passed on through the co-operation of innumerable evolved entities through countless levels of awareness over countless millennium.

This is very important to understand, that there are no “God Secrets” that were never meant to be known. What is available to know is available to all depending on their individual psychological development, their desire to know and their persistence in their pursuit of this knowledge. There are some things that will never be known by you or me, simply because “All That Is” has evolved through so many universes and systems for countless eons, that His experience is far beyond anything you or I could imagine as actual Being. In that respect, All That Is would be considered by you and me as a quite Alien consciousness and what is normally considered as communication has never been an attribute of God. His experience is not translatable in terms of physical existence but is understood by some of the most evolved, ancient entities. As you increase your knowledge, the knowledge of All That Is increases exponentially, so in that respect, you will never catch up. Having said that, there is much that can be learned and much to be learned and there is no limit to the potential of your consciousness except your own self imposed limitations. There are limits to what the physical brain can comprehend, but there is no limit to what the intuitions can consciously know. What you believe cannot happen, will never happen. No consciousness of whatever import, has any limitations other than its own desire or lack thereof, to know and to advance its knowledge and experience through the use of the intellect, the intuitions and the process of physical and psychic evolution.

Therefore, to be very specific, my information and whatever knowledge that I do possess does NOT come DIRECTLY from God. But I ask you this; If a letter is dropped in a mailbox in New York, picked up by the postman, delivered to the regional sorting center, put on a plane and flown to a west coast airport facility, picked up by a mail truck, taken to a sorting center in Los Angeles, and delivered by a local postman to your mailbox, is not the information conveyed in the message just as valid and the message still from the same source? I realize that this is not the best of analogies, but my point is this, my information comes from an advanced entity and teacher far more evolved than I, but the source is still the same and that entity or teacher is in a much better position to interpret, translate and pass on the Knowledge of All That Is. You will intuitively know the validity of the information in this column and must make your own judgment as to its worth and its source.

I use the pronoun “you” simply that is the vernacular of the source that sends the information, the exact way it becomes known to me, and that is the way that I write it, but please understand the “you” used in the material given to me, refers to “me”, but also applies to you, so I use it that way.

This answer could have been found if you had been reading some of my past material, you would have understood that direct communication originating with the Prime Energy Essence Personality that we all refer to as God, is and will always be forever impossible. As most of you know, I prefer the title of “All That Is”, simply because it does not carry as much religious connotation with it, and truly contains within the title, a very accurate description that pretty much covers all aspects of this Prime Identity. By now I hope we all realize that God,/All That Is, is not in any sense of the word a being, an identity or is God/All That Is, a personality in our usual understanding of the word.

At the risk of alienating some of our newer readers, I will try to be as delicate aS possible with this material, as it is not my intention to denigrate anyone’s beliefs, but if you are reading this column, you realize that the time is at hand for you to begin to take baby steps away from the old, worn out and misleading simplistic myths and tales about creations, tribulations, raptures and destructions wrought by an angry God in a raging childlike tantrum. These stories were accepted by societies in one form or another for centuries, but it’s time to put them aside and take a step out of the dark ages of outdated, incorrect and very limiting beliefs and learn about the true nature of that Divine Energy Identity. I prefer Identity over Personality. (P.S. God does not look like Charleston Heston does not carry a scale to judge you and a lightening bolt to smite you for you indiscretions). But the good news is that ANSWERS are available.

All That Is always was and always will be the ONE SOURCE of the endless amounts of energy that powers your universe, all universes and all realities that exist even outside of universes as you know them. Reality existed before the creation of your universe and will exist when it is gone. Universes are not a pre-requisite for meaningful systems of reality. All That Is, then, is that energy source that powers all creations and in supporting all realities through Its Being. All energy has consciousness, energy is mass in another form, that energy forms all physical objects, therefore All That Is, supports the structure of all there ever was, all there is or ever will be. All That Is, is cleverly hidden within all of its creations and YOU are just one of its creations, so in case you wondered, there is a spark of divinity in your being as there is in all physical beings and structures.

There is a spark of divinity in a flower and a snail. All That Is could more appropriately be called a Divine Process whereby all realities achieve their expression of their own individual ness. It is a mistake to “personify” God. All that is has no specific gender, but through its creations, knows all genders and although He has no face, She represents and wears all faces. (The choice of pronoun is arbitrary on my part). The human physical brain at this stage of its development is simply is not able to comprehend such a Prime Energy Source.

In what we will call the “Beginning”, All That Is began creating, is creating today and has been creating ever since and Its creations subsequently began creating, their own creativity bursting forth, and their creations began creating, each creation brought forth myriads of possible new creations, and in this massive creative abundance, nothing goes uncreated and everything that is created exists eternally. Not one iota of consciousness, even reaching back before the beginning creative endeavors of All That Is, has ever ceased to exist. Of course, those most ancient creations have evolved beyond anything that you or I can imagine and they have created their own universes, galaxies, and personalities such as you.

The magnitude of this ancient pyramid of creative identities existing within more advanced identities creates the “Pyramid Gestalt” that I have spoken about many times. (See diagram) This diagram is meant to help you visualize the reality of the God (consciousness) Gestalt. Although I have used different levels of actuality to illustrate my point here, remember, there are no real divisions or separations and all consciousness is part of something greater than itself. Also, all matter carries its own burden of consciousness to its own degree and to that end electrons, atoms, cells, molecules, rocks and what you call living matter all have their own kind of consciousness. You are part of your soul, your soul is part of its oversoul, the oversoul is part of an entity and your entity is part of other more advanced entities, and it goes on forever.
I hope I make this clear.
Posted by W. Allan at 1:35 PM

Dear Allen, again... I could not help but pass along a word of praise. Having been tutored by some great teacher's... Seth, Abraham, Castaneda... I tend to lean towards the fundamental core of 'systems' or 'explanations', that then can be extrapolated in one's mind... to 'infinity'. And you Sir, have the gift to articulate what I can sometimes only imagine. Thank you for that! Alexis

I invite you to preview any of the books shown below that are available for download to your computer or any E-Reader device. W. Allan

Answers By God! 10 Most Elusive Spiritual Enigmas Of All Time

Answers By God! Death-Why You Die, Where You Go, What You Do

Answers By God! What God Is

Answers by God! Why bad things keep happening to you

W. Allan
Naples, Florida, United States
I am interested in teaching about the true nature of spiritual reality and mankind's intimate connection with nature, the natural environment and the universe.